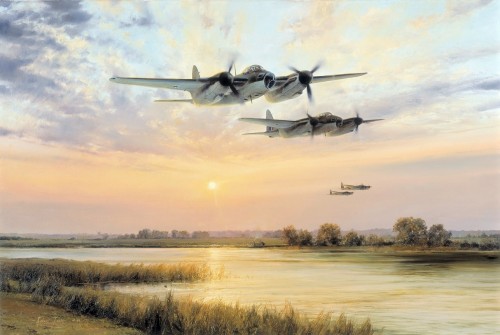 As dusk brought the end to the day’s action for some, it was just the beginning of things to come for many others. RAF raids continued throughout the night as the heavy bombers headed for targets across occupied Europe supported by one of the most versatile aircraft of them all; the DeHavilland Mosquito. Its speed was enviable and it soon became the finest multi-role combat aircraft of WWII.

Internationally hailed as one of Robert Taylor’s most iconic paintings, Broken Silence depicts a scene typical in Norfolk, England during the summer and autumn of 1943 as two pairs of Mosquito B.IVs, each powered by two phenomenal Rolls-Royce Merlin Engines, head out over the East Anglian fens on a low-level precision strike against enemy targets in Holland.