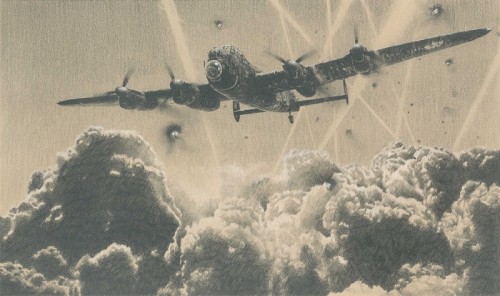 A Lancaster from 61 Squadron, heavily damaged by German night-fighter attacks, heads to Dusseldorf during a bombing mission on the night of 3 November 1943. Although badly wounded, pilot Bill Reid and his crew pressed on to bomb their target before returning home. For his courage and devotion to duty Reid was awarded the Victoria Cross.

Few aviation artists come close to Richard’s extraordinary ability with pencil and paint which is why his drawings are highly prized by collectors. Completed in his trademark technique using a mixture of graphite with white highlights on buff colored paper, to create a unique ‘sepia’ effect, this stunning piece emphasises the amazing standards which Richard has achieved.

THE SIGNATURE
Each print has been personally autographed by the artist and a highly regarded veteran who flew with Bomber Command during WWII:

W.O. HAROLD KIRBY
Flight Engineer on Lancasters with 467 & 97 Squadrons on missions over Europe including the Bergen U-boat pens, Dresden and the Dortmund-Ems Canal. He finished the war having completed a total of 44 Operations.

THE REMARQUES
Regarded as one of the most gifted exponents of pencil work in the industry, Richard will hand-craft an original drawing in the lower margin of each print in these editions.

If you have any particular request, such as specific aircraft markings, please ask when placing your order and we will do our best to accommodate.