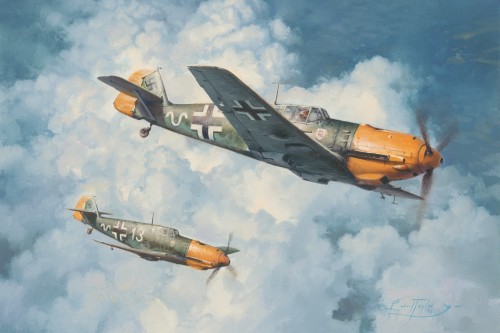 Eye of the Sun – Unframed

You can feel the tension in this evocative painting as Messerschmitt Bf109s from 7./JG2 Richthofen head out on a long-range fighter patrol in September 1940. With the sun behind them they hope to launch a surprise attack on unsuspecting RAF aircraft, however these enemy raiders will soon be intercepted by some of Fighter Command’s most determined ‘defenders of the realm’.

Many of the Luftwaffe’s great names didn’t survive the war, however three of the most iconic Aces that flew in the Battle of Britain have signed this outstanding release:

THE COLLECTORS & REMARQUE EDITIONS
These THREE signature editions are additionally signed by two of the most highly-respected Luftwaffe Pilots of the Battle of Britain:

Generalleutnant GÜNTHER RALL Knight’s Cross with Oak Leaves & Swords
Flew Bf109s with III./JG52 during the Battle of Britain. By the end of the war he scored 275 victories making him the third highest-scoring Ace of all time.

Major HANS-EKKEHARD BOB Knight’s Cross
Flew Bf109s with III./JG54 becoming one of the top Aces of the Battle of Britain with 14 victories. He finished the war with 60 victories.