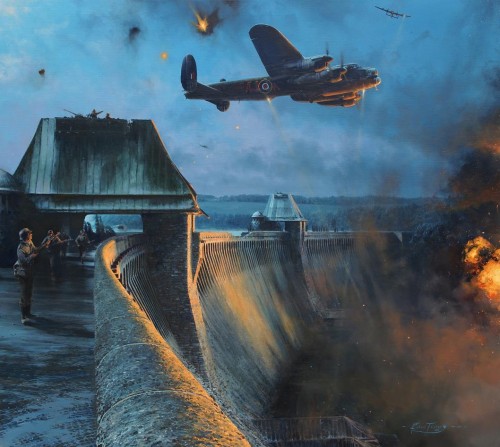 The Dambusters – Last Moments of the Möhne Dam

The largest dam in Europe, the fortress-like walls of Möhne held back nearly 140 million cubic metres of water essential to the industry and factories of the Ruhr. The Air Ministry had long ago decided that if the Möhne dam, and the two other major Ruhr dams – the Eder and Sorpe – were destroyed, it could deliver a massive blow to the Nazi war machine. But cracking open the mighty dams would require exceptional flying skills; and so, on 21 March 1943, a new squadron was formed specifically for the task, the only time this ever happened in Bomber Command. Known as 617 Squadron and led by Wing Commander Guy Gibson, it was not only the squadron that was unique, so was the weapon they would be using – Upkeep – a cylindrical, hydrostatic ‘bouncing’ bomb. The brainchild of Barnes Wallis, Upkeep was designed to skip across the surface of the water, sink against the dam’s massive wall, and explode with enormous force at a precise depth.