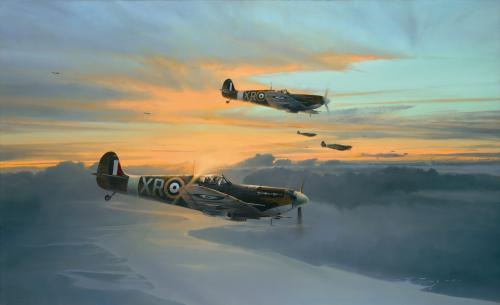 Robert Taylor’s tribute to the young American volunteer pilots who joined the RAF to fight for freedom at the time when Britain stood alone against the Nazi domination in Europe. This magnificent painting features Spitfire Vbs of 71 Squadron RAF as they return to their base at North Weald, September 1941, the young American pilots perhaps taking a brief moment to marvel at the myriad colours of the late evening sun –welcome relief from the perils of recent air combat with the Luftwaffe high above the English Channel.

Each print is signed by many of the most highly regarded Eagle Squadron pilots to
have flown with the RAF. A wonderful tribute to the legendary American Eagles

THE LIMITED EDITION
Every print in this new Commemorative Limited Edition by Robert Taylor, has been signed by THREE highly respected American fighter pilots who, when Britain stood alone in Europe, volunteered to fly with the RAF to fight the monstrous tyranny of Hitler’s Germany.