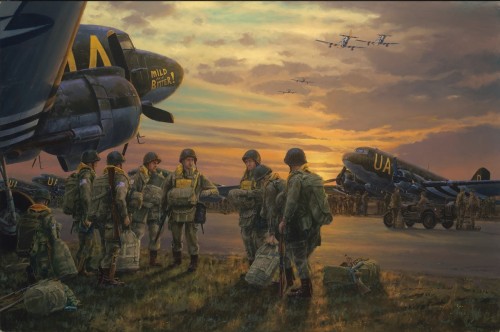 On the evening of 5 June 1944, at a dozen airfields across southern England, more than 13,000 American paratroopers prepared themselves for a mission that would change the course of history.

The next morning these brave young men found themselves at the forefront of the bitter fighting to secure the right flank of the Normandy beach-head. The odds against them were huge and, if they failed, the American amphibious landings on Utah and Omaha beaches would face disaster – the destiny of the US First Army rested squarely on the shoulders of the 82nd and 101st Airborne Divisions.

Anthony Saunders brings to life the tense few hours before departure in his dramatic painting ‘Final Roster’. As daylight fades, men from the 505th Parachute Infantry Regiment, 82nd Airborne Division, prepare to board the C-47 Skytrains of the 43rd Troop Carrying Squadron that will take them to Normandy.

As a tribute to the gallantry shown on that fateful day, two veterans who took part in operations on D-Day have joined artist Anthony Saunders in signing every print in this memorable edition:

Staff Sergeant EDWARD H. TUNISON USAAF
74th TCS, 434th TCC, 9th Air Force
Served as a Radio Operator with the same crew and on the same C-47 throughout his time in Europe. His crew dropped paratroopers from the 101st Airborne Division into Cherbourg in the early hours of D-Day before making two more trips on the same day. They towed Horsa gliders carrying British troops during Operation Market Garden, flew re-supply operations during the Battle of the Bulge and towed gliders again during the Rhine crossings.

Captain DEAN McCANDLESS
505th PIR, 82nd Airborne Division
Commissioned as an Officer with the 82nd Airborne Division he served with 1st Battalion and made the first of his four combat jumps on 9 July 1943 at Sicily, and two months later jumped at Salerno. His third drop was on D-Day successfully capturing the bridge over the Merderet River and his final jump was during Operation Market Garden before being wounded during the Battle of the Bulge. He was awarded the Silver Star and Purple Heart.

On the evening of 5 June 1944, at a dozen airfields across southern England, more than 13,000 American paratroopers prepared themselves for a mission that would change the course of history.